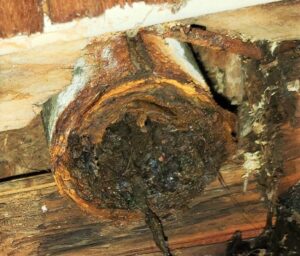 Dissolved iron and manganese are common contaminants that require treatment in potable water and industrial wastewater processes. Problems created by iron and manganese include discolored water, undesirable taste, bacterial growth, and fouling of process piping. The Safe Water Drinking Act sets limits of 0.3 ppm for iron and 0.05 ppm for manganese. Even low iron & manganese concentrations (as low as 1 ppm) can clog pipes, so iron removal is critical when present in sensitive water processes.

Iron can be present as either a ferric state or ferrous state. Ferric iron is insoluble in all but very acidic water (pH less than 3), so it’s most commonly present as a suspended solid in water. Water with an orange discoloration typically contains ferric iron which can be filtered without additional oxidation. Dissolved iron is generally ferrous iron, which is water soluble at any pH value and doesn’t cause water discoloration until it is oxidized. Similar to iron, manganese can be present in either a manganic (suspended) or manganous (dissolved) state. Dissolved iron and manganese removal requires oxidation to form precipitated solids which can be filtered from water. Iron and manganese behavior is very similar and treatment methods are generally the same for both. H2K Technologies provides industrial water treatment solutions to remove iron and manganese from your process. 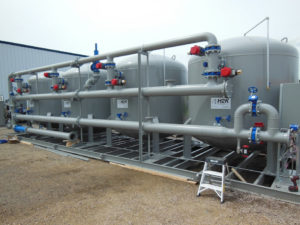 Manganese greensand is a common media selection for iron removal. Greensand media contains a relatively low concentration of manganese dioxide, so filter bed regeneration is required. Potassium permanganate is used for greensand regeneration and can be introduced either continuously or intermittently to provide long-term iron & manganese treatment. Other filter media with higher manganese dioxide composition can be used without chemical injection for filter regeneration. Media with higher concentration of manganese dioxide includes Pyrolox, Filox-R, Birm, and Katalox Light. Click the link below for more information on multimedia filters for iron & manganese removal. 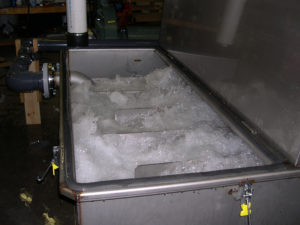 Higher concentrations of dissolved iron & manganese typically require additional oxidation before filtration. Aeration is a common method of iron oxidation since dissolved iron is easily precipitated out of solution when oxygen is introduced. H2K offers a non-fouling air stripper as an aeration treatment for iron and manganese. Our DTA-Series aerator is designed to precipitate high concentrations of dissolved iron & manganese and handle large amounts of suspended solids. The large-chamber design and raised aerators provide continuous operation even in environments with heavy bacterial iron and precipitated iron loading. More information about H2K’s non-fouling aerator can be found at the following link. 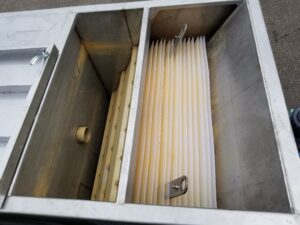 Additional settling and filtration are typically required after aeration for complete iron and manganese removal. For solids loading greater than 25 ppm, an inclined plate clarifier is necessary to reduce loading before media filtration. A clarifier includes a large retention volume filled with inclined Lamella plates for enhanced solids removal. Oxidized iron can form small precipitated solids, so a coagulant injection is often used to enhance settling and removal. Coagulants like alum, Chitosan, and polymers allow iron to collect and form larger particles for quicker settling. Iron, manganese, and other suspended solids collect below the inclined plates in the sludge hopper where they can be pumped to a sludge tank or filter press for disposal. Click the following link for more information about H2K inclined plate clarifiers.

Iron = Element #26, a naturally occurring metal with potential to be present in either dissolved or suspended form in water. Suspended iron can cause a reddish discoloration in water.

Manganese = Element #25, a naturally occurring mineral which often forms compounds with iron. It can also be present either suspended or dissolved in water, with suspended Mn causing a blackish water discoloration.

TSS = Total Suspended Solids, a measure of particles which can be removed from water via filtration. Suspended iron and manganese are typically ferric & manganic ions, respectively.

TDS = Total Dissolved Solids, a measure of particles in water which will pass through a filter. Dissolved iron and manganese are typically ferrous and manganous ions, respectively.

Oxidation = A method to convert dissolved solids to suspended solids to allow filtration. Iron and manganese can be oxidized with catalytic media, aeration, and chemical injection to precipitate solids which can be filtered from water.